Samuel’s coffee story starts with his grandad who had a little farm of 5 manzanas that he gave to his son and then to Samuel. Other farms have been bought later on and the family now has a few pieces of land.

Before his grandad bought it, the farm was already called El Cambalache which means: ‘the exchange’ as the original farm (that was 100 manzanas) was exchanged by their owners for a house in town.

After the revolution, this farm was split and sold to different people, Samuel’s grandad got the parcel right in the middle and kept the name. La Esperanza 1,400m and el Manantial are another 2 of their farms and Gloria, Samuel’s mum, owns La Picona that was named after the conic shape of the parcel. The altitude on La Picona is 1,300 – 1,400m. Samuel managed the farms and grows Catuai, Caturra and Maracaturra. 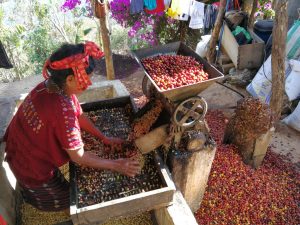